I was thirteen-years-old the first time I got thrown out of a Dairy Queen.

The manager came charging out from behind the counter like an angry drill sergeant.  He glared at Andy and me with an iron jaw and then threw a stiff thumb over his shoulder toward the door.

“What!” Andy demanded (although it came out Wh-Wh-Wh-What!).  “What about them?” He motioned toward the trio of octogenarians—a balding, silver fox and his two blue-haired lady friends—seated two booths behind us.  They were stifling laughs with handfuls of tattered napkins.

“Out!” the manager repeated.

We surrendered, gathered the remains of our ice cream and dignity, and headed for the exit.  With one hand on the door, Andy stopped, turned, and pointed at the three giggling seniors.  I have no idea what he meant to say.  The words remained trapped behind his stuttering tongue.  The manager shoved us out before Andy could release his clumsy, but always rapier-like wit.

Outside in the hot summer sun, we mounted our BMX bikes and rode away, laughing at being dishonorably discharged from DQ for shooting spit balls at old people.

What possessed three senior citizens to start wadding up napkin shreds and tossing them into Andy’s hair?

Sometimes Andy was just an invitation for abuse.  An overweight, Asian teenager with a severe stuttering problem was the punchline for many jokes.  Add the hair—Andy often Aqua-Netted his mop into an alarmed porcupine—and you had the perfect target for a playful assault.

The first volley of paper mortars had bounced harmlessly off our table.  However, those three troublemakers were soon landing perfect strikes into Andy’s peculiar pompadour.  One of the bluehairs hit paydirt first and she tittered like a schoolgirl.

Naturally, we returned fire—we were kids!—and that’s the only part the manager saw, so Andy and I got the boot.

I still smile at that memory.

And tear up a bit.

I don’t believe the Silver Battalion attacked with malice.  Something about Andy’s presence always awakened some childlike folly in others.  Those age-spotted tots just couldn’t resist the urge to toss napkin balls at the funny kid’s spikey hair.

When we shot back, our three opponents laughed even harder and doubled their artillery efforts.  And there we were, five goofy kids, separated by decades, thriving in the infamous Battle of DQ (until Sgt. Buzzkill halted our wargames).

Decades later, I’m the lone survivor of that day.

God, how I miss my friend.

“You hungry?” Andy asked as we rode our bikes through the park. 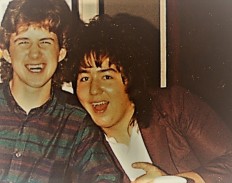 Without another word, Andy hopped the curb and pedaled through the grass to a gathering at the park shelter.  The smoking grill, photo albums, casseroles, baby strollers and wheelchairs all told me this was a family reunion.

I held back to determine if my friend’s next action was one of genius or insanity.  It was always a little of both.

Andy hopped off his bike, leaned it against a tree, and then strode with confidence toward the food.  The chunky Asian kid drew some side glances from the Caucasian clan, but no one said a word as Andy snatched a plate and piled it high as he cruised along the buffet line.

Andy was always one to press his luck.

I wasn’t surprised when he sat down with some old ladies.  No one could’ve mistaken Andy for some offshoot of that lily-white family, but—unlike Sgt. Buzzkill—no one tossed him.  I could only laugh as I watched my friend start ch-ch-chatting with those strangers while chowing down on their feast.

Andy finished his meal, patted one of the grandmothers, gave another a hug, and then hopped on his bike and rode away.

My friend (who lived as if every waking moment might be his last chance for some fun) was right.

About a good many things.

After high school, Andy moved to the beach.  I went to college and got married.  I saw him once more during one of his visits home.  I only saw his parents once more after that, and that was at Andy’s funeral.

It’s been close to twenty years since my friend set off for whatever his eternal adventure might be.  There’s not a day I don’t think of him and smile.

The greatest friends breathe life into the best parts of us.

And tear up a bit.

I never got to tell Andy how much better my life is because of him.  I never got to thank him for teaching an awkward teenager to drop the weight of everyone else’s opinion and embrace the joy of the moment.  For showing me how to not just be comfortable in my own skin, but own it like a royal wardrobe.  For introducing me to Monty Python and the beautiful sarcasm of British humor.  For reminding me that risk and adventure are to be embraced, not avoided.  For not only tolerating, but honoring my own quirks … like my eclectic musical taste.

Like that time I demanded my Bruce Willis tape was better than his newest Ozzy album.

He had colorful commentaries about such things that I can’t print here, but they were well designed, poorly delivered, stuttering diatribes of filth that made me laugh in spite of my Sunday School upbringing. 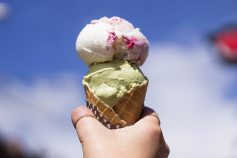 Every last day of school, I pick up my kids and take them to Dairy Queen to celebrate another good year.  We sit and laugh over silly stories.  We talk about summer plans and adventures to come.

Of course, I think of Andy.  My mind always replays that day we got tossed while three rascally seniors laughed like kids on the playground.

I consider what a peculiar delight Andy was to so many people for just a handful of moments.  That he was my friend for so many years remains a treasure.

Now with two kids in college and only one left in high school, I realize my DQ trips are numbered.

I often wonder if my kids will remember the friends who have left undeniable footprints on their souls.  I wonder if they’ll be wise enough to realize what a gift those friendships are, and how the greatest friends breathe life into the best parts of us.

I wonder if they’ll take the time to tell that friend, “Thank you.  I love you.  You made my life better.”

I hope they savor life’s sweetest treats that melt through your fingers like ice cream on a summer day.

Friends, there’s WAY too much negativity out there.  Spread some love.  Share this and tag a friend.  Tell them, “Thank you.  I love you.”

2 thoughts on “When I Got Thrown Out of Dairy Queen”