I’m not sure what possessed us to take our kids to New Orleans for Spring Break.  It was a spur of the moment decision.  We were hanging out in the living room after our family time of devotion and prayer when the phone rang.  It was our friend, Steve.

“Want to join us and spend a few days in the Big Easy?” 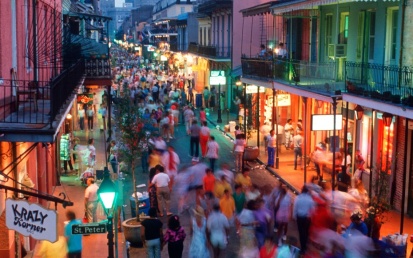 I was instantly intrigued.  Laura and I hadn’t been to the Crescent City since pre-Katrina.  At that time, we had one young son and a daughter on the way.  A lot has changed since then–both for New Orleans and our family.  That first kid is now away at college, and the other two (a sixteen-year-old daughter and a fourteen-year-old son) jumped at the chance for such an adventure.

After a fourteen-hour drive from West Virginia, we met up with a friend for breakfast.  Chad lives in the North Shore area, about 45-minutes from the mecca of Cajun/Creole culture.  Naturally, I assumed he could give us some pointers about must-sees.

He read my curious expression:  “You’re this close and you don’t go?!”

He continued, shaking his head:  “It’s too dangerous.  You have to be constantly on guard.  There’s about ten shootings a day.  You don’t hear about all of them because of politics and corruption, but it’s just not safe.  You guys be careful.  Stay in the heart and don’t wander off track.”

Clearly, a lot has changed since Hurricane Katrina.  When Laura and I last visited, we had no concern for our safety.  But maybe the only thing that had really changed is we’d last visited just as a couple.  Now we had two of our children in tow.

The alarms in my head began to sound:  “Why did we agree to this trip?  Why would we expose our kids to potential harm?”

Indeed, New Orleans is an incredibly unique place.  On the surface you get the dim-glitz of streetlights, fern-adorned balconies of wrought iron, sparkling beads everywhere, music pouring out of nearly every doorway, and the spicy perfume of some of the best food in the world.  She can be very seductive.  But beneath that veneer is a larger, spiritual reality:  New Orleans is a dark, seedy place.

The name of “New Orleans” conjures up a succulent variety of images, from the soft sounds of jazz to whirring ceiling fans, wrought iron gates, and hot, spicy food. Along the swollen Mississippi River, the city dozes, only to come alive at night with the revelry of its people and the blare of music and laughter from Bourbon Street and the French Quarter.
These are the images of New Orleans that many people think of… but there is another side to the city as well, an underbelly and a darkness that is as carefully hidden as the gates to the small gardens which lurk between buildings in the Quarter. This dark side is there, just like the spectacular gardens and courtyards […].  Even if you don’t see it though, it’s liable to sneak out at you and surprise you when you least expect it.
The dark side of New Orleans is as compelling as the chicory-laced coffee and the delicious “beignets” however…. it’s a dark side which is filled with the seductive images of voodoo, vampires and ghosts. Only in New Orleans could darkness and death seem so appealing!

Known by many as America’s Most Haunted City, New Orleans now seems to struggle between cashing in on her festive black-magic history while downplaying the moniker of Murder City.  For the spiritually adept, there is a constant ethereal presence that brushes against your soul as you walk the streets.  Laura and I both felt it (though we didn’t speak of it until later). 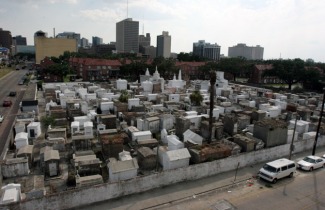 Chad’s warning evoked a nauseous realization:  the seductive charm of sensual delights had lured us into a canopy of moss and vines, surrounded by dark, swampy waters.  We found ourselves in a city where the dead exist above ground, where children being killed by stray bullets  prompts special meetings by City Council.  Suddenly, good intentions for a fun family trip turned into another WTF? parenting moment.

When your mind is hyper-attuned to potential death and dismemberment around every corner, you find yourself eyeing strangers with an unhealthy dose of suspicion.  But that seems to be the way of the whole world these days, not just in the Big Easy.  No matter where I go, a broken part of me assumes some degree of bad intent with any movement toward those entrusted to my care.

Indeed, it’s a dangerous world.  But our vulnerability to it felt magnified as we boarded the St. Charles Streetcar.  In close quarters jammed with strangers, one can’t even trust the old woman sitting there eating her tangerine with its enticingly sweet aroma.  But that old woman was the least of my worries. 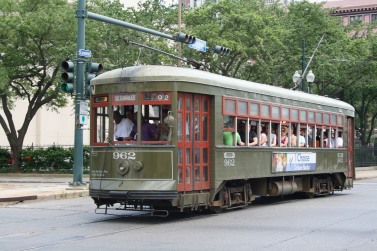 The young girl climbed aboard and made her way down the aisle with purpose.  Without hesitation, she squeezed into a seat directly behind my son, Danny.  In her early twenties with a crop-mop of blond hair, she moved just fast enough that I couldn’t make out her tattoos–and there were many.  Naturally, I became suspicious about the backpack she had slung over her shoulder.

With Danny seated behind me on the crowded streetcar, I knew that if anything happened, I would be too slow to respond.  Once more, I was out of position to protect my son.

“You should have put the kids in front of you, you moron,” I derided myself.  “Then you could watch them.  Guard them.  Defend them.”  I suddenly recalled a New Orleans editorial from decades ago; it offered something like this:

Tourists, be warned–In New Orleans, there’s always the potential for a screwdriver in the neck.

“My God!” my soul was crying out as I tried to feign tourist-delight.  “Why did I bring my kids here?!”

We couldn’t have gone more than a few blocks when the assault came.  And like all acts of violence, it came in the blink of an eye that seemed to linger in eternity.

The kingdom of heaven suffers violence, and the violent take it by force.

The young woman hopped up and moved into the aisle.  Stopping between Danny and me, I felt her backpack brush against me as she turned to face my son.

“Do you play tennis?” she asked.

“How could she know that?”  But before my mind could answer, “Witchcraft!”, I remembered that Danny was wearing his West Virginia Wesleyan College Tennis cap, a gift from his older brother.

In my mind’s eye, I could see the distress on Danny’s face as the stranger engaged him.  “Yeah,” he mumbled hesitantly.

“That’s really cool,” she said as she turned and took a single step up the aisle, then came back to face him.  She was in position for what she’d come to do, and I was frozen in place as the words floated from her lips:  “I love tennis and always wanted to play, but I was never coordinated enough to do it.  That’s awesome that you play.  You must be very athletic.”

I didn’t have to turn to see the joy explode in my son’s heart in that instant.

He had been assaulted with a random, drive-by love bomb.

This is why I brought you here, I heard a familiar whisper in my soul.  This very moment.

To the random young lady on the St. Charles Streetcar, I have something to say to you:

Thank you!  Thank you so freaking much!  My son is struggling through his teenage years.  He is painfully shy, socially awkward, and lives under a smothering blanket of doubt and shame; he doesn’t see his incredible worth, can’t imagine how awesome he is, and doesn’t believe he has any real friends.  He often feels isolated, discouraged, and diminished in a world that seems to be set against him, ready to pull the rug out from under him with every step he takes.  That you took thirty seconds to not only notice my son, but also speak a blessing into his soul meant more than you can ever know.  Your seemingly insignificant give-a-damn for a stranger on a streetcar made our fourteen-hour drive more than worth it.  I would have driven to the ends of the earth for that moment.  And I now realize that you were hiding your wings in your backpack, my dear one.

Friends, we live in a broken, fallen world full of desperately lost souls.  Too often we hide like perpetual victims, cowering in fear of some evil around the corner, or self-medicating in a Mardi Gras of dazzling distractions.  But a beautiful young lady reminded me that we all have the ability–no, we have a duty!–to assault the darkness.  Sometimes all it takes is speaking a simple blessing into another person’s heart:  I see you.  You bring something special into this world.  You matter.

We drove all through the night to visit a violent, haunted city that exists below the waterline, and I came out feeling baptized and born again.  And filled with incredible hope.

I love live music, spicy food, and a good beer.  And the Big Easy offers all of those things.  But I’ll forever love New Orleans because of the life I experienced in one blazing moment on the St. Charles Streetcar.

Keep an eye out for your fellow passengers.  And remember the words of warning from our friend Chad:

“Stay in the heart and don’t wander off track.”

Prophetic words, indeed.  Sage advice as I head off this morning for my next assault.

4 thoughts on “Assault on the St. Charles Streetcar”