(This piece was shared by CBS News, among other various news and social media outlets.)

Well, the post-election protests have finally made their way to my hometown of Huntington, WV.

We’re always behind the times, but what took so long?

For you out-of-towners, I know that you’ve heard of our little neck of the woods.  Just yesterday we observed the bitter anniversary of the Marshall University plane crash—everyone seems to know about that.  We recently made national headlines by having nearly thirty drug overdoses in a single four-hour period.  The whole Kim Davis / gay marriage saga played out about an hour from here (sorry, Kentucky, that’s your headline, but we’re close enough that we had to suffer through it).  It also became national news yesterday when two Clay, WV officials (also about an hour from here) were goofy enough to show themselves on social media, one calling our current First Lady an “Ape in heels” and the other applauding the sentiment.

To the outside world, I bet we don’t look like the mecca of hope.  In fact, we get so used to reading our own press that it’s sometimes hard for us to imagine that a ray of light could shine out of our backyard.

However, the first protest has begun.

Just this past Sunday in church, we were discussing the topic of hope.  We were running a bit late, but Elizabeth had something that she wanted to share with our small group.

“I went for my usual run this morning,” she said, “and that often takes me by the mosque on Twentieth Street.”

I know this neighborhood well.  In college, Laura and I lived there in a slummy little house where the curtains moved when the wind blew; the upstairs neighbor’s dog would urinate and it would rain down through our ceiling.  Ah, good times.  In this part of town, it’s not uncommon to have your car vandalized, your property stolen, or come home to find a stranger passed out on your porch.

I’ve often wondered why the Muslim community picked this neighborhood for their mosque.

“As I was approaching,” Elizabeth continued, “I could see that someone had written graffiti all over the sidewalk outside.  I immediately thought, “Oooh, noooo.”” 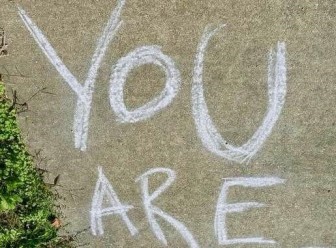 We all shared the sentiment.  In fact, a chorus of “Oooh, noooo” wafted up from our group.  We didn’t need to hear the rest of the story.  We knew the ending, all of us conjuring up images of the racial slurs and epithets that were cowardly left outside of a place where Muslims gather for fellowship and prayer.  We know our town and our people.  We’re quite aware of the small-mindedness and the ignorance out there.  As I said, we read our own press.

Though we didn’t need her to finish, Elizabeth continued.  Thankfully.  Because we were all wrong in our assumptions (as we so often are).

“As I got closer,” she said, her eyes glistening and a slight quiver betraying her jaw, “I could see that someone had taken sidewalk chalk and written in huge letters, ‘YOU ARE LOVED.’”

A major blow has been struck right here in Huntington, WV. 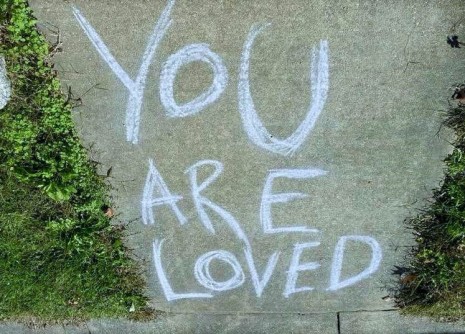 Make no mistake, friends, this was a cataclysmic protest.  No homes or businesses were looted.  No cars were overturned or set on fire.  No one was injured or lost their life.  But this deadly assault against darkness is more newsworthy than most of the fodder we consume on a daily basis.

This likely won’t make the national news because media outlets know that sensational negativity sells, but trivial tales of hope tend to wither on the vine and the newsstand.  We gobble up headlines that fuel the fire of whatever is already burning in our bellies.  Just this morning I was rolling my eyes at a journalist friend who shared a completely fictitious “news” story on social media.  Yes, a journalist sharing a made-up, sensational story—it happens.  I suppose if it fits the narrative that has him twisted up in angry knots, then the truth doesn’t matter too much.

Still, the sidewalk-chalk headline on Twentieth Street shouts out a bigger truth:  “YOU ARE LOVED.”

For that very reason I’m asking you to share this with the people in your world.

We all need a breath of fresh air about right now.  For me, this is it.  I hope it is for you, too.  Breathe it in deeply, expand your lungs with the goodness of it, and then go fill your community with a new song.  Call it a love protest.  Actually, get dangerous and start a riot of love.

How’s that?  Is that newsworthy enough for you?

When I consider the person who scrawled this sidewalk manifesto (while the rest of us gnash our teeth over race, religion, and gender issues), I’m assuming it was an innocent, well-intentioned child with her tiny bucket of chalk.

However, a deep part of me hopes this assumption is also wrong.

I like to think it was a world-weary adult, fed up with the whole mess, who stepped out of the darkness with just enough childlike faith to believe that something so simple as loving your neighbor might actually be all it takes to make America great again.